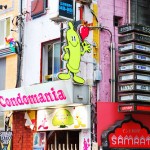 I’m going to say it straight off: Japanese guys have smaller cocks.

I confess that my evidence could be more reliable as I haven’t actually seen any. Japanese guys really don’t do it for me. I’m a tragic yet common victim of the Electra complex, and I really like my men to be 6ft plus.

So how dare I make such a statement?

The condoms. The girth is small enough to be docking penises like lambs’ tails.

The story takes place in Tokyo, when I met another international student on a study trip. Tall, pale, scruffily dressed, with ugly, retro glasses, a paint-stained cap, and a sparse moustache. In that first impression, I struggled between finding him incredibly fascinating and writing him off as a complete dick.

We didn’t really speak again until we ended up seated next to one another at a group social occasion. He wasn’t very forthcoming with conversation. But at some point, he turned and threw some short answer over his shoulder, and it hit me. Attraction button was now switched on.

During the next month and a half, he preoccupied my mind as I danced invisibly before him. Then suddenly, he started showing an interest. Within a few days, it became apparent where we were heading.

We left a party early to “make food.” Food eaten, eye-contact avoidance, and twenty awkward moments later we kissed. Not with great passion, but with the cautiousness of two people who aren’t really sure what the other one wants.

After a while, he said goodnight and went back to his room.

The next night, to his surprise and reticence(!), I invited him to stay over. The next few days involved some passionate encounters sans full-on sex, as neither of us had any condoms.

One afternoon, highly frustrated, I ordered him to get dressed and marched him to the local convenience store. Which turned out not to be very convenient at all.

Thus began the longest and most expensive condom quest the world has ever known.

We first found a rack at a local drugstore, where glitzy boxes laughed at us in their sparkling glory. Having heard the rumours about Japanese men being smaller, we settled on “Super Big Boy – Size L” with a picture of a stallion adorning the front. It seemed a sensible choice, given that he is average in size. Twelve of these beauties cost us £17.

We returned home and somewhat artificially reinitiated our love-making session. We ripped open the packet, pulled out a condom and tried, to no avail, to squash it onto his cock.

We eventually rammed it on to his poor, tortured member and attempted sex. However, Super Big Boys aren’t made of nice and stretchy latex like Durex. Oh no. It feels like being shagged by a plastic bag. And it sounds like it too.

Another fruitless quest meant that we resorted to “Mega Big Boy – XL”, once again adorned with fearsome animal imagery, so the man can boast about his “elephant” size. 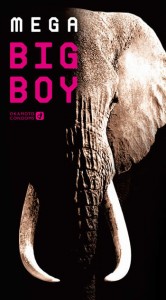 These proved a little better, but fitting them was still a struggle. And if there’s one way to kill an erection, ramming a condom onto it certainly works. The passion dies too.

Nevertheless, we persevered. Until one split.

My reaction in one word: FUCK.

Desperate Google searching revealed that emergency contraception cannot be bought over the counter in Japan.

Turns out you have to go to a women’s clinic for one of these little life-savers, or rather, baby-blockers.

We step into a small waiting room area. All the walls are a nauseating baby pink and a giant painting of an incredibly ugly baby leers out over the seats.  Plinky-plonky music, no doubt intended to sooth, is on a loop, giving the setting video-game surrealism. Women are sitting quietly holding their babies, or playing with them on a mat. There is not another man in sight.

We are given a form to fill out and perch awkwardly on the edge of the chairs. He scans the form and starts translating for me.

Him: “They need the date of your first period.”

Me: “My first ever period?! Are you sure they don’t want to know the date of my last period?”

Him: “I made it up. It’s actually my birthday.”

Me:  “I first menstruated on your 15th birthday?!”

We hand the form in. After a while, the secretary comes over to us and makes some urgent enquiries in a low voice. I only have beginner Japanese. But I know the word for period.

“Seiri, seiri….” she repeats, getting louder and louder.

He quickly mutters something. They both turn to stare at me and confer some more. She leaves.

Him: “I read the kanji wrong – it was your last period they wanted. She wanted to know if you had been pregnant during the past 8 years. ”

Me: “So she thought I got pregnant when I was 13 and stayed pregnant forever after?!”

Me: “I wish they’d turn that music off!”

We return to staring at our feet. The lady approaches us once again. More conferring. I get the gist. She’s asking what we need. This should be no problem. We looked up the word on the Internet. You just have to say “Morning After Pill” like you’re yawning: “moningu afuta piru.”

He repeats and repeats, and she gets more and more confused. In the end, red-faced, he mutters something and her eyes widen in understanding. With another quick glance at me, she retreats.

Eventually, we are called in to the consulting room to meet the doctor. Surrounded by female assistants and treating only women, apparently this is the only male that works in this “women’s clinic.”

The doctor proceeds to ask lots of questions.  I squirm in my seat.  Then I hear a word I recognise: “shippai.” Failure.  Yes, damn right it was a failure! If you’re condoms weren’t so fucking small!

I am given two pills to be taken at a twelve-hour interval.  We pay over £30 and scarper as fast as we can.

Back at the apartment, by unspoken agreement, we throw ourselves into frantic sex. Over an hour of pounding. Part de-stressing. And part, “We don’t have to use a god-awful condom for this round!”

Exhausted and sore, we sleep. Then we shower and head out for an evening of eating and drinking with the group.

I love food. I eat more than my fill and greedily hoover up any leftovers. Stomach bulging, I discretely take Pill Number 1.

We return home, and sleep. Until I wake up at 2am feeling extremely sick. A hamster is using my stomach as an exercise wheel.

I promptly vomit up my food. Try to sleep. Vomit some more. And the pattern repeats throughout the night, with him comforting me all the while.  At 10am, I just hope I can keep Pill Number 2 inside me.

Fortunately, the pill worked despite the horrible side-effects. After this incident, we paid a visit to the friendly Condomania chain across Tokyo and found ourselves some reliable Durex. That was another £17!

We’ve since continued our international relationship. But wherever and whenever we end up meeting, a packet of Durex is sure to be in our suitcases.

This piece is not meant to be offensive to Japan or the Japanese. I love Japan and I plan on living there next year. Yes, I am aware of the current crisis. I have donated to the cause. Have you? If not go here: http://www.redcross.org.uk/japantsunami/?approachcode=68816_googlePAD5JpTs&gclid=CLCTvrig3acCFUqApAodNxNT9Q

One Response to Whisper #26 – C(ondom)atastrophe