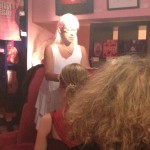 I got chatting to Barbara Carrellas after her UK launch for Ecstasy is Necessary last night.

Guess what we talked about? Yup, Fifty Shades of Grey. For anyone who writes about sex for a living, it’s a hot topic. Partly because we’re all obsessing over the alchemy of the book, what makes it so spectacularly successful (read: why is she making so much more money than us, dammit); and partly because we’re all a bit world-weary at the sort of critical response that has attempted to ignite a moral panic over what is, essentially, a pretty tame book.

We lack the language to truly express our needs and desires, our fears and anxieties. We’ll bite our lip (not in the Ana sense) and put up with terrible sex, or no sex at all rather than talk it over. We will harbour secret fantasies for decades rather than try them out. We’ll have flaming rows in order to defend ourselves from really listening to our partners. And we’ll punish our lovers by withholding sex, even when it’s the thing we most crave.

Because it’s so tied up with attractiveness, and therefore our self esteem, sex is the thing that can hurt us the most. This means that there is often something within us that flinches away from addressing it. But a bit of negotiation – and, yes, ‘don’t touch my chest’ is perfectly acceptable and normal – would help us to clearly establish our boundaries.

The truth is that the spanking and whipping we find in Fifty Shades is the least threatening part of that relationship; it’s the exchange of power that carries the most risk, because of its potential to harm us emotionally. But we mustn’t forget that power is exchanged in ‘vanilla’ relationships too, in much more hidden ways. Sex is just the tip of an iceberg that also encompasses finances, the division of labour, family life, the language we use, and a million other shards of ice.

We can learn from the unsexiest bits of 50 Shades: bring the darkest things into the light, and negotiate them, not just once, but continuously. Or, for a better guide, try Barbara’s new book.