It is, perhaps, slightly obtuse to go to the Fat Duck with the aim of understanding more about home cooking. But it’s an obvious step, really. In the national imagination, the Fat Duck has become the uber-restaurant, representing the sum total of our aspiration around food. 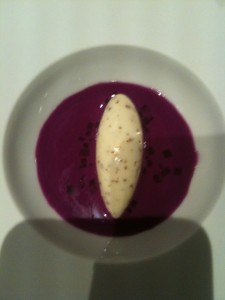 In a country that buys millions of high-end cookbooks only to serve up ready meals each night, and that still sees working (and cooking) in a restaurant as a stop-gap job for students, the Fat Duck represents something close to conceptual purity. It turns out the dishes of astonishing complexity, and makes its immaculate service integral to the encounter. It is quite impossible to replicate at home, even for the kind of bore who misses the point of dinner parties entirely. 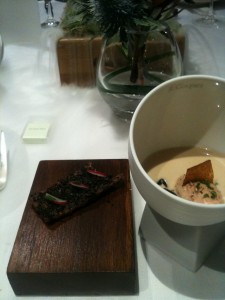 They certainly know how to create a mystique. I came home with a little pile of souvenirs in my handbag – a menu, a Mock Turtle bookmark, a sweetshop-scented card – that have been pounced upon by friends and handled reverently, like relics. People with whom I would usually only make polite conversation at parties have texted me to ask how my meal was.

I won’t bore you by dissecting the menu – that’s the task of a different sort of a blog, and in any case, it’s been done to death. I will say that not every dish was note-perfect, and that there was a slight feeling of disappointment whenever we were presented with ‘normal’ food, like the delicious saddle of venison. But overall, it was a giddy ride, full of moments of high camp (the spritzing of scents above our heads as food was served; the nitro-poaching of aperitif foams at the table to commence the meal), and some incredible bursts of flavour.

By the end of our dinner, we began to drunkenly argue (after the most extraordinary selection of wines I have ever tasted) whether it merited the fame and the expense. One of our party felt that it wall all puff, that we were falling for a series of sleights of hand that would lead us to eat nearly anything. We had, she suggested, been thoroughly ‘Hestonized’.

And I suppose the truth is that Henstonized was exactly what I wanted to be. I was a very willing confederate of the experiment. I wanted, just for one night, to be offered some transporting magic, and to be able to say that I’ll never see the like again.

By contrast, at home I scrupulously avoid restaurant cooking. I see daily cooking as a practice, a gentle reflection of my daily moods and desires. I like simple, well-tempered dishes that demand few ingredients and reflect the passing seasons.

But for Valentine’s day, I surrendered to a baser instinct – my hideously competitive nature. Herbert remarked, in passing, that the best lamb dish he’d ever eaten was a crumbed rack of lamb in the Barbican, at least 10 years ago.

‘Perhaps I’ll cook you a rack of lamb soon, then.’

‘I doubt it would be as good.’

Well, either H has a death-wish, or he’s mastered the art of manipulating me into cooking exactly what he wants. I had to cook that rack of lamb, just to prove that no jumped-up chef at a sodding art gallery was going to outdo me.

As I was ordering the meat, it struck me that rack of lamb seems strangely retro now, a luxury cut in an age of self-conscious nose-to-tail austerity. Therefore, I decided to go all-out turn of the century retro, pairing it with parsnip rosti and a confection of reduced beef stock, butter, redcurrant jelly and marsala that could really only be called jus.

Let’s just say that Herbert and the collected chefs of the Barbican circa 2000 have collectively admitted defeat. 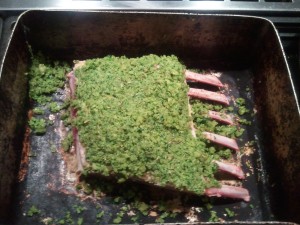