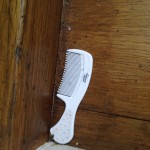 There is a comb on the floor by the kitchen, and we’re all just pretending it isn’t there.

This is a long-standing habit in our household, partly because we own a large number of items that have nowhere to live. Rather than finding a place – which would involve a group meeting of some kind, or, worse, one of us acting unilaterally so that the other person would never find it again – we just conspire not to see it.

Every now and then, Bert will notice the comb, pick it up, and pretend to use  it, which means I spend the next five minutes picking fluff out of his hair. This inevitably leads to me getting my hair combed*, too.

After that, he’ll drop it somewhere else, so we can start ignoring it again. Maybe it’s a good way of reminding us that we ought to brush his hair every now and then. It’s growing now, but he started off so bald that we never really adapted. By the time he’s fifteen he’ll have some sort of wild thatch, and we’ll end up blinking at it, thinking, damn we really should have started brushing that at some point. And then we’ll have to shave his head. And then he’ll hate us forever.

Perhaps the comb is in the right place after all. Maybe I should start leaving his toothbrush there, too.

*banged repeatedly with a comb