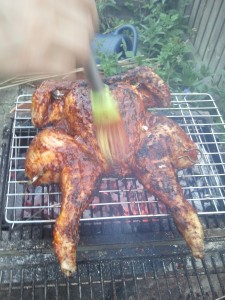 I’d like to say that I grew acquainted with Piri Piri Chicken during a long, sultury holiday in Portugal, but that is sadly not the case. Instead, it was a small cafe in Gillingham that inflamed my desire.

By day it served fry-ups to the local ne’er do wells, and by night, the owner’s father fired up the char grill to cook the hot, tender and aromatic chicken. The value of this was entirely lost on the residents of Gillingham: the place was mostly empty bar me and Herbert, and the occasional gaggle of Portuguese expats drinking coffee and herding enormous quantities of children late into the evening.

The owner was always drunk. Often, he could barely speak, so instead he would smile and you and sway ever so slightly as you seated yourself. We always ordered the same thing – a whole chicken between us, a salad of soft lettuce, tomato, cucumber and onion and a bowl of rustling fries for twelve quid. It was never less than perfect.

In addition, it seemed churlish not to order a carafe of their rough, fizzy red wine. For a long time, I assumed this was a Portuguese speciality – after all, this was the nation that brought us Mateus rosé. But no: when I asked the owner one night about the wine, he grinned for a moment as his drunken mouth tried to form words, and then told us that the wine was fizzy because he couldn’t work out how to get it out of the barrel without running it through the coke machine.

We drank it all the same. And kept on eating that delicious chicken. One night, a fight broke out between two of the customers, who were so drunk that they could only paw at each other, comically. The owner watched on, no more capable of coherent movement than they were. In the end, Herbert had to usher them both gently to their seats like fractious toddlers.

We ended up moving into a house just round the corner from the restaurant. I’m not sure why we did it; what seemed from a distance to be local colour felt menacing and sinister when it was raging on outside our front door. As we made hasty arrangements to move out again, we both wondered aloud if our judgement had been skewed by the Piri Piri place. Good chicken, sadly, isn’t enough.

Last night, we held the first barbecue of the year and reunited ourselves with our beloved Piri Piri. This isn’t the feeble, stringy stuff of Nando’s, but rich and robust, and hot enough to make your nose run. Next time, though, I may have to buy a Soda Stream to see if I can’t reproduce that wine.

I cooked my Piri Piri Chicken after seeing this blog post over at Food Stories – I can honestly say it’s the best recipe I’ve tried. Thanks to Helen for a wonderful dose of inspiration!