A sex life with teens?

I have two ginger sons. When my husband (known as the BigFella; he is tall rather than weighty) and I took the momentous decision to have children we understood there would be some impact on our sex life; we had friends with young children; we’d read the manuals. Naturally, we hoped for good sleepers but knew it was a lottery.

Unlike others we knew, when friskiness was off limits for six months or more, our sex life resumed sharpish after Ginger1’s birth. After a traumatic, fast labour my body snapped back to pre-baby form within a fortnight, and so we made love. After Ginger2’s arrival – this time by C-section – we had sex within a month. We were advised to take it easy; wait six weeks, the doctor said, but I drove after four (unaware that I would not have been insured had there been an accident) and I figured if I could drive I could get laid. Bizarre but true.

Neither of our boys were good sleepers; in fact, they were horrible sleepers. Especially our first, who woke at 2am for a play and a chat before returning to bed (ours) for a couple of hours, after which he was up for the day. While others munched on croissants, I dug into fish and chips; 9am was effectively my lunchtime. An ‘early-riser’ the health visitor said, quaintly, smiling. You could be forgiven for thinking this had an adverse effect on our sex life. It didn’t. It just happened a little earlier in the evening than BC. The little fella went down like a dream at 8pm so we always had a couple of hours to ourselves before we’d fall into a deep and dreamless sleep. And with energetic and helpful grandparents available and willing we managed weekends away periodically: New York, Paris, and, closer to home, London. Luxurious shag-fests with a bit of culture thrown in when we could drag ourselves out of bed. I’d be lying if I said our love making was as vigorous, imaginative and frequent as it had been when we were young and newly in love, but all things considered it was more than satisfactory.

So when did the passion disappear? Quite recently, that’s when. And disappear isn’t the right description – it slipped out the back door, shrunken and apologetic. So quietly we didn’t notice, for a while. No one warns you of the impact of an adolescent in the house on your sex life. If you live in a mansion where a rave could take place in the west wing without those in the east wing knowing anything about it then you will probably think I’m talking gibberish. But, like the majority of the population, we live in a pretty standard three-bedroomed house, where the walls are only marginally thicker and more sound proof than a good quality tea towel. Ginger1 is in his early teens; too young to be out and about having fun (and a sex life of his own) and too old to be tucked up in bed zzzing by 9pm. Teenagers are around. All the time. We often hear him padding around his bedroom after we’ve finished our cocoa and turned out the light. Still a horrible sleeper.

And teens are so aware. And so much more assertive than our generation. Like all teens, now and then, Ginger1 is mortified if his parents are blatantly sexual. On the rare occasion when we go in for a snog against the dishwasher, while ostensibly preparing the evening meal, if caught we are met with a very vocal ‘Yeeeeww!’ As a liberated, metropolitan couple we are open with our children, but we are not without inhibitions. One evening, amorous and desperate after a bottle and a half of Pinot Grigio we gave it a go only to be stopped in our tracks when Ginger1 banged on the wall, asking us to control ourselves. I remember hearing my own parents ‘at it’ at about the same age, lying there, fingers in my ears, desperate for them to finish, but I would never, ever, have asked them to stop.

What about making good use of your fella’s morning glory I hear you cry? Teens have to be dragged out of bed. There’s a four year gap between our boys, so the youngest is still up early-ish. On the rare occasions we wake up before both boys, we have gone in for a quickie, but these are rushed, whispered affairs, with one eye on the bedroom door and where the BigFella keeps his boxers hooked over one ankle in case an emergency leap out of bed is called for. And the grandparents? They are older, and less energetic, and teens are less than keen to spend entire weekends with gramps.

The gap between fumbles widened from weeks to months. ‘When did we last have sex?’ we asked at last. Once we’d noticed its absence, boy did we miss it. We might be middle-aged farts but the thought of hanging up our paddles and chains (I blame Fifty Shades) is too depressing to contemplate. We’re not so ancient to rule out sex altogether – if indeed anyone should do that. Smutty comments and bottom squeezing occurred regularly between my grandparents and though I found it disconcerting as a – you’ve guessed it – teen, by the time I was all grown up it delighted me to think that even after all those years (they’d been married 51 when my grandfather died) they still found one another desirable.

How do the BigFella and I resolve this dilemma? We have dates, mid-week, when the Gingers are at school. Mostly for sex, but also to wine and dine (lunch) and talk without being constantly interrupted or eavesdropped upon. We look forward to these secret liaisons like naughty teenagers and they bring us closer together, most definitely. We’re both freelance and as such we have the freedom (mostly, we do have demands and deadlines like everyone else) to do this, and I appreciate that this is not an option many could do regularly, but it works for us. And we are more than happy to sacrifice a day’s lolly to keep our love active. There’s nothing to beat the sideways glance and grin we give each other when Ginger1 returns home and says: ‘So what have you been up to today?’

About: Laura grew up in a Welsh market town and now lives in Brighton. As well as writing fiction, she works as an editor for literary consultancy, Cornerstones. She has published short stories in magazines, digital media and anthologies. She writes general fiction as Laura Wilkinson and erotic romance as L. C. Wilkinson. Her first hot romance, All of Me, is published by Xcite, an imprint of Accent Press. Currently, she’s working on two novels: one is set against the backdrop of the 1984/85 miners’ strike; the other is a romance following a petulant young woman and a man running from his past. What does all her work have in common? Compelling stories, fascinating characters, and ideas that make you think a little. At least she hopes so! To find out more visit her sites – www.lcwilkinson.com or www.laura-wilkinson.co.uk – for news and freebies. Or follow her on Twitter: @ScorpioScribble . You’ll also find her GoodReads, and she loves to hear from readers and other writers so do get in touch.

Thank you sunshine, so far the summer of 2013 has been brilliant.

As temperatures have risen, good looking blokes have been peeling off layers and showing off their square shoulders, muscly guns covered in intriguing tattoos, thick calves and not forgetting, the biggest show offs with their washboard abs. Then of course there are the chaps who just have a pretty face. To be honest I like looking at all of you.

I think it’s time for women like myself to admit that we perv at men. For the record I don’t think this makes me a pervert. I have no desire to meet these dudes I speak of – I am happily married to a man with a full beard that I love (both him and the beard that is). I don’t even want the guys to know I’m looking, I just enjoy a sneaky peek.

That’s my definition of perving by the way – appreciating attractive people from afar without making them feel uncomfortable. For me it’s a really enjoyable pass time. Maybe men thought they had the monopoly on appreciating the human form, but no… we women like to check you out too.

As I see it, in our fast-paced western society, finding a spare 5  minutes to appreciate a fit chap has got to be good for mental health. From behind the protection of my massive sunglasses, whilst sipping my pricey iced latte, peering at lovely lads is a joy. I feel the need to stress I’m an equal opportunities perv – matters of shape, size, height and occupation can vary according to mood.

Don’t they mind I hear you ask… well I hope not. Honestly I think there’s an unwritten contract that I am part of when it comes to perving – I am drawn to guys with a peacock style of dress or undress so hopefully the quiet attention I give them, is me simply holding up my end of the bargain

This wonderful distraction isn’t a sinister hobby, it really is just my opportunity to celebrate the work of mother nature when it comes to creating men.

So just to confirm, as the humidity rages on with this unpredictable summer, if you see a middle aged woman glancing away as you turn around it was because I was appreciating your arse. Thank you for wearing those shorts, they showed it off a treat.

I have had photo hidden like a dirty secret since I was 13. It’s only since I cleared my mum’s house that I found it again.

I was on holiday in Cornwall. I hardly spoke to him the evening I met him. I didn’t even kiss him. I was very naive at the time and completely innocent. I met him at the disco. He asked me to meet him the following day for a walk, and then he asked me to take my clothes off for this shot…..I didn’t.

Please take care of young women/daughters whilst on holiday this year: they may not be as well equipped as may think. 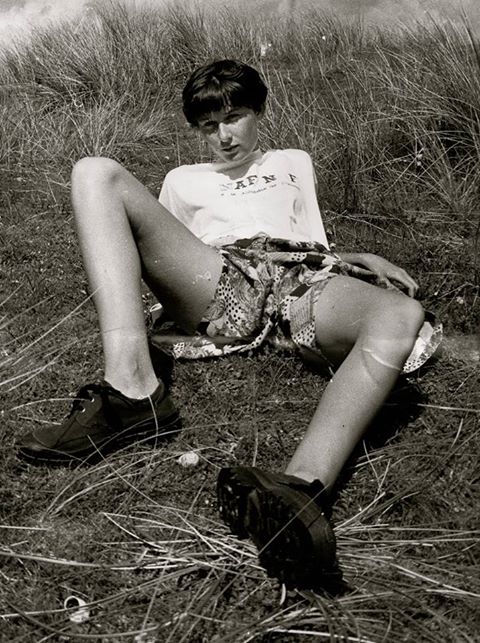 I’ve written a guest post for the wonderful Elizabeth Cage, about my favourite erotica and why I like a bit of fumbling with my sexy stories: