The earliest dream I can remember involved boil-in-the-bag babies.

I dreamt my mother wanted a new child, so she bought it from the supermarket, a small, square frozen lump in a plastic bag. My grandma put it in a pan of boiling water, and we all stood around enthralled as a baby unfurled. I remember watching its eyes open, and its teeth pop into place, one by one.

It occurred to me yesterday that I was still clinging to the idea of the boil-in-the-bag baby, frozen in stasis, ready for the moment I wanted it.

My plan to freeze my eggs has failed, you see. Yet again, my insubordinate body has refused to make things easy for me. I just don’t have enough of the right sort of hormones at the right time to make the grade. Unsurprising, I suppose, but strangely undermining all the same.

For me, the option of freezing eggs was a wonderful luxury, while it lasted. It allowed me to carry on being indecisive while my fertility inevitably declined.

I hugely envy the women and men who are sure when the time is right to have children, or who, alternatively, are absolutely certain they don’t want them at all. I’ve just never felt like that. I’ve never felt the urgent pull of ‘now’, and yet I can’t bring myself to say ‘never’.

The best I can manage is ‘later, if at all’, but I can see that I’m going to be allowed that. However much I want it to be the case – and I don’t believe this is a moral issue, just a matter of physical possibility – I don’t have the option of storing away my babies in the freezer, ready for a potential future defrosting.

And after I’d finished crying to Herbert about my stupid, bastard luck, those limited choices suddenly seemed refreshing. There’s something exhausting about putting things off indefinitely. 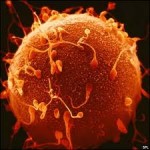 I’ve had my coil removed.

Don’t panic, I’m not trying to conceive. Actually, it’s more like the opposite: I’ve had my coil removed so that I can spend more time delaying pregnancy.

This labyrinthine bit of logic comes courtesy of the Bridge Clinic’s Freeze and Share programme. It lets me freeze a clutch of my eggs for free (the process would normally cost around £5k), provided I donate some to women enrolled on their IVF programme.

I’m 34 this year, and still deeply undecided about having children. My view literally changes from one day to the next, but nothing in me says ‘Now’. Maybe it never will – after all, I’m fond of joking that I’m waiting until I can afford a squadron of nannies. And yet I know that the quality of my eggs are declining already, and this will drop even more rapidly after 35.

At the same time, my doctor has told me that I could never conceive without medical support (if you’re thinking of adding a comment to this post saying, ‘You never know, miracles happen’: Don’t. The world isn’t quite the same as Take A Break would have us believe). If it wasn’t for this, I’m not sure I’d be pursuing the Freeze & Share, but it seems like I’d have to undergo this step sooner or later. And the idea of donation is hugely comforting to me – if I’m too flaky to reproduce, then at least I’m helping someone who’s surer than I am. It assuages some of the guilt, somehow.

I confess that I was absolutely dreading the effects of the coil removal, but nothing catastrophic has happened so far. I’m perhaps a little bit hormonal, a little bit grumpy and tight-throated. I just have to wait for my period to arrive now –  if indeed it arrives at all, I’m not very good at such things – so that I can undergo a list of tests to see if I’ve got what it takes.

I secretly suspect that I haven’t, that it can’t be that simple. Not that I think the physical process of egg-harvesting is easy; from watching friends, I know it isn’t. It’s just that I can’t believe that science has provided me with this miraculous little get-out clause, the ability to delay parenthood until I’m settled, certain, content, if that time ever comes.

In the meantime, we’re trying to use condoms, which seems like a bizarre new imposition on our lives. I’m utterly incompetent with the damned things, and have a terrible habit of saying, ‘Oh it’s okay, I’m functionally infertile. Let’s not bother.’ I must get out of that mindset.

But this led to a fascinating discovery on my part. Last week, condom-free, Herbert said, ‘Mmm, it’s so nice without the strings.’

‘What,’ I said, ‘you could feel them?’ The coil leaves two wiry strings wrapped around your cervix, which are supposed to be undetectable during sex. Clearly not. I had no idea he was politely refraining from mentioning them.

This reminded me that it took six months for him to work out what they actually were. When they came up in conversation one day, he said, ‘OH! That makes sense now. I thought you’d grown hairs.’

I suppose I should be grateful that my husband thinks I have a hairy cervix, and yet still finds me attractive.