After all those months of fretting and waiting (and generally grumbling), the time finally arrived. Albert James was born on 7th May, weighing a distinctly average 7lb 8oz (not quite the 12lb that was predicted). He was two weeks early. I may have taken a vow against over-sharing lately, but hey, I’m a proud parent so I’m bending the rules.

My waters broke on Saturday night, and he took 45 rather painful and sleepless hours to emerge into the world. I will not regale you with the full details, but I will say that I have discovered two new tastes: I love epidurals and hate pushing. 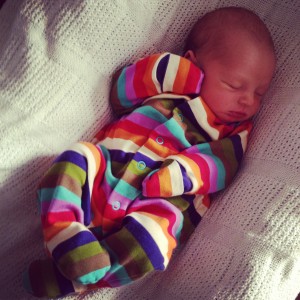 Anyway, I’ve pretty much forgotten all the bad bits now. He’s beautiful. I was afraid that I would become a different person after I’d given birth, but I’m exactly the same me as before, it’s just that I’m now in love with a strange new creature. I pointed out to him yesterday that no woman will ever drink in his face so adoringly as I was at that moment. That was after I’d had a little cry because he was so lovely. Don’t worry, I am also doing entirely normal things like swearing at the telly and being fondly reunited with gin. I’m just a bit smitten, that’s all.

As I write, I can hear Herbert chattering away to his ‘little one’ while he runs a bath. I am quite, quite content. Already, I know that I’ll miss these precious first weeks when they’re over, sleepy and vague as they are. 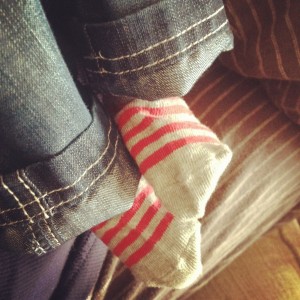 ← Horror where you least expect it…
50 Shades of Hot – Storify →

16 Responses to Our New Arrival