Once More, With Feeling by Victoria Coren and Charlie Skelton 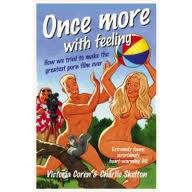 It doesn’t take long for them to abandon their high artistic ideals; the script they create sounds more like a pantomime with added sex than anything that would get my pulse racing. But then, the pair are forced to make a series of compromises from the outset; sourcing actors who look the part, are willing to take an HIV test, will wear a condom, AND are able to actually turn up on the day proves impossible.

I’m not sure if I entirely fancy watching the film they ended up making (although I confess I’m more than a little bit curious), but I thoroughly enjoyed the journey that produced it. And what stuck with me is this: sex is a neutral act in itself; morality emerges from how you behave around it.

One Response to Once More, With Feeling by Victoria Coren and Charlie Skelton