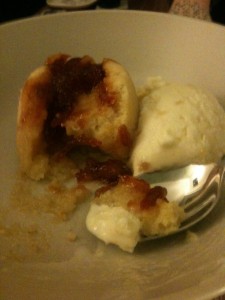 It’s been a long winter, and a long week. On Friday afternoon, when Herbert texts to say that he can’t wait to get his chops round a glass of wine, I know it must be bad. H barely drinks; well, compared to me anyway. He is the eternal designated driver.

As for me, well, I was fresh from a massage which had ended as it always does: the masseuse widened her eyes and said she couldn’t believe the knots in my shoulders. How does this happen? I meditate and do yoga daily, I exercise, I live a pretty unstressful life. What on earth do I do to get so knotty?

More to the point, what on earth can I do to get un-knotty, and to un-knot someone else in the process? It would be ideal if me & H took it in turns to get stressed so that we could soothe each other, but this never happens. We both get stressed at the same time, and therefore usually chafe each other into petty and over-emotional arguments.

I would like to say sex is the answer, but it isn’t. Sex is a great stress-reliever if you can manage the trick of falling into bed together in the first place. A shag that’s soley aimed at relieving stress, without much desire behind it, is a very sorry shag indeed. And likely to lead to further petty and emotional arguing.

No, what is needed tonight is oblivion. I’d like to refer to Blur’s Coffee and TV at this stage, but that’s actually about sobering up. This is about doing the opposite. Two Bottles of Wine and and the Contents of Sky Plus doesn’t have quite the same ring to it.

Not to mention the really sinful food. We start by dipping toast into puree made of roasted butternut squash, cumin, garlic, olive oil and red wine vinegar, with yoghurt and chipotle sauce blobbed on top. Then there’s chicken soup, then a cheeseboard.

But the piece de resistance are two little marmalade sponge puddings, accompanied by ginger ice cream and 30 Rock. At least, after all that, you can’t fail to sleep well.

You can also make this into one whole pudding by doubling the ingredients, pouring the mix into a greased 2 pint pudding basin and steaming for 1 hour 30 mins.

1. Grease the pudding moulds, and cut a circle of greaseproof paper to fit the top of each of them. Into each, spoon a dsp of marmalade followed by a dsp of golden syrup.

2. Beat the butter until soft, and then add the sugar.

3. When pale and fluffy, beat in 1 egg at a time with a dusting of flour to stop it splitting.

4. Add the milk mixture alternately with the remainder of the flour mixture. Beat well.

5. Divide the mixture between your two moulds. Top with the circle of greaseproof, and then tie another layer of greaseproof over the top with string. Some people like to fold a pleat into this layer incase of expansion. Trim the edges well so that they don’t get soggy.

6. Place on a trivet in the bottom of a saucepan, and pour in boiling water so that it comes halfway up the pudding moulds. Cover, bring to the boil and steam for 30-40 mins, until the tops of the puddings are springy. Check regularly to ensure the pan doesn’t boil dry.

7. Unwrap, turn out and serve with ice cream, custard or cream.