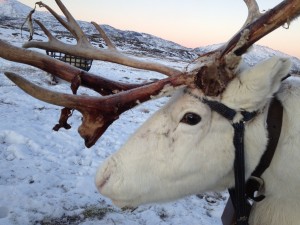 On our final day in Norway, we get up early to find the minibus that will take us out to Whale Island to meet native Sami folk and their reindeer. I am so tired that I feel sick, but I don’t want to miss this one, last expedition.

I feel better once we arrive. The drive takes us through the snowy Lyngen Alps, behind which the sun is rising, staining the mountains rose pink. We pass fjords where people are swimming, despite the unthinkable cold. Eventually, we pass a herd of reindeer and a Sami lavuu (which to my ignorant eye, resembles a Native American tipi), and stop at a wood cabin nearby.

There, we are greeted by a smiling woman named Trine, who ushers us in to get into warm clothes. It’s so cold today, she tells us, that we should put snow suits on over our coats, and rabbit skin deerstalkers over our existing hats. I have to ask if there’s anything big enough to fit over my bump, and suddenly I am the centre of attention. This is the first time in the holiday that the people around 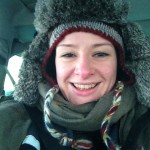 me have really been aware in pregnant; after all, bulked up in our various layers, we all look like zeppelins. But now I am being admired for leaving the house at all, it seems, and asked how I’m feeling, and when it’s due, and do we have any names yet. We proffer Albrecht, which apparently isn’t nearly as funny to Norwegians or Americans.

We are shown to a little caravan of reindeer sleds, which are all tied together, and staggered so that the reindeer that pulls the person behind you walks by your side. I am the first to be seated, alongside what I soon realise is the most docile of the reindeer, which is pure white with gentle eyes. Once we have trotted around the frozen lakes, Herbert tells me that his reindeer kept giving him wild, terrifying looks. This is possibly because he has a reindeer skin draped over his lap; he proved too tall to fit into any of the snow suits, and so has to find other ways to keep warm. When H asks if he can stroke one of them, Trine tells him, ‘Well you can, but bear in mind that the reindeer hate you.’

‘Do you notice how scruffy their antlers look?’ she asks us. ‘That’s because they’re due to fall off soon, before the Spring comes. These are all castrated males, but in the wild, they use their antlers to fight over the females. Around February, they shed their antlers, and soon grow another set, but they’re soft for a few months, and tender because the blood vessels are near the surface, so they avoid fighting until they’re hard again in the Autumn.

‘Meanwhile, the females’ bellies are swelling, and they have their young just when the males’ antlers are softest. So the females keep their antlers for longer, so that they can defend their babies against predators, because the males can’t look after them.’

Despite the snow suits, the cold is setting into our bones now, and so we are taken into the lavuu for some reindeer soup (yet another reason that the reindeer hate us). As I finish my bowl, Trine hurries over to replenish it. ‘You do not have your antlers, Mama Reindeer,’ she says, ‘so we must fill you up with soup instead.’

I well up; she’s summed up exactly how I’ve been feeling all this time, like I’m missing some defence or other that I’d normally expect to have.

That night, we walk down to the waterfront for a final meal, passing a group of Japanese women who are gazing into the sky.

‘They won’t see the Lights in central Tromso!’ I say to H.

He squints into the space above him. ‘Hang on,’ he says, ‘there might actually be something there.’ We walk to the water’s edge, where it’s darker, and above us see a huge arc of dark green light, stretching from the other side of the fjord, right over the top of the city. It’s like a final farewell from the lights, a bonus for all the hours we’ve put into per suing them over the last few days.

We eat in a restaurant that we can’t really afford, except that by now, we’ve become so immune to Norwegian prices that we’ve stopped worrying. I eat cod’s tongues and local duck, and Herbert eats cured lamb and reindeer fillet, washed down with beer from the town’s brewery.

‘I genuinely feel like we had one last adventure,’ I say to him. ‘I feel a bit more satisfied now.’

‘There’s no way we could have taken a child on this trip, not for a good few years. It was too cold, too many late nights, too much time being cooped up. It was definitely better with just us grown-ups.’

‘It’s funny though, because at the same time, I don’t feel so bad about losing that anymore. We’re just heading for a different sort of adventure now, aren’t 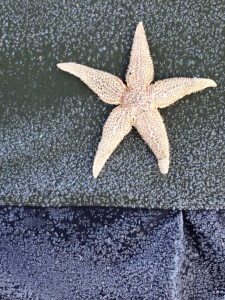 We chew on for a while, and then Herbert pauses and raises his glass, and says,

‘To the Northern Lights!’

I chink it with my glass of water.

‘To the reindeer, who hate us!’

‘To Albrecht,’ I reply, ‘who kind of made all this possible.’

← Under the Lights
Bump-feeling and other unexpected pleasures →

One Response to Mama Reindeer