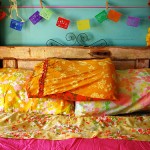 We are in bed, naked. Herbert is looking reasonably enthusiastic; me, I’m hoping I’ll gather momentum along the way.

He leans in and kisses me.

‘I can’t help it; I’ve brushed mine, which means that you now taste of coleslaw.’

Herbert goes into the bathroom, and I hear the electric toothbrush buzz on and off. Back in bed, he breathes minty breath on my face.

He reaches a hand between my legs.

‘Before we get started,’ I say, ‘I’ve got two sex questions.’

‘One: how do we make sure we remember to have sex without having the seductions to jolly us along?’

This is pertinent, because we’ve not exactly kept up the pace over Christmas. I’m trying to be open-minded about this; after all, there have been few moments in the last three weeks that we haven’t been in the company of other people, or hideously bloated, or both. I think we can be forgiven for failing to swing from the paper chains on a regular basis. But now it’s January, the tree is down, and I’m beginning to feel like I’m at risk of retreating into celibacy again.

‘Two: how do we keep up with the more interesting stuff? The stuff that requires planning? How do we learn to say, Let’s crack out the rubber nurse’s outfit tonight?’

I expect Herbert to be irritated by this, seeing as I’ve pretty much put pay to his optimistic half-erection, but he rolls onto his back and thinks.

‘I mean,’ I say, beginning to feel a bit guilty, ‘maybe they’re the same question. Maybe I’m asking how we still make space to explore new things. I’m just a bit worried we’ll go back to how it was before.’

‘I dunno,’ says H. ‘I’ve had a few ideas. I think I’ve still got a seductions hangover.’

‘Oh dear. You mean you can never face them again?’

‘Right,’ I say, and I must look as surprised and delighted as I feel, because he says, ‘Now that I’m reading through your blog, I see it all in a different way. Like, I didn’t realise that you can’t come from doggy style. Well I suppose I did realise it, but I hadn’t really thought much about it.’

‘I still enjoy it. I don’t feel like everything needs to lead to an orgasm. I still enjoy the sensations. And I enjoy giving you pleasure.’

‘Well I never realised that before. It’s so fascinating seeing it from your side.’

‘Well, I think that’s what’s changed for me this year. I used to think that the whole thing was about giving me an orgasm. Now I feel like I can have an orgasm any time I want; when we’re together, it’s a different thing.’

‘Yes,’ I say, ‘That’s why I object to 69-ing. It’s not that it isn’t pleasant, but I’d rather focus on giving you pleasure than half-enjoying you going down on me while I give an indifferent blow job. I’ve learned to enjoy getting you off.’

‘In some ways, it’s harder to receive pleasure than give it. I always feel like I’ve got my make myself useful.’

‘It can feel a bit humiliating, can’t it? To just take pleasure, nothing else? It can feel incredibly exposing.’

Herbert thinks for a while. ‘Alright then,’ he says, ‘I think I’m up to the challenge. I’d like a blow job please, and I promise I’ll concentrate.’

3 Responses to Keeping On