How to Stay Married by Jilly Cooper 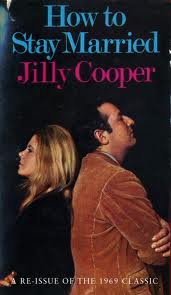 When I was growing up, the 60s seemed relatively recent. I was not old enough to remember them myself, but it was clear that my parents did. It was reflected in their style, their attitudes, their musical tastes. It was familiar ground.

Yet How to Stay Married is the most extraordinary period piece. It’s a heady combination of the deeply traditional:

‘If a wife feels resentful that she is slaving away…she must remember that it isn’t all roses for him either. He has given up his much-prized bachelor status for marriage, and he probably expects…to come home every night to a gleaming home, a happy wife, and a delicious dinner.’

‘If you want to dance cheek-to-cheek with the most attractive man/woman in the room, wait until your husband/wife is securely trapped on the sofa in another room.’

Well, maybe not all that swinging. In this book, ‘affaires’ are inevitable, usually the woman’s fault, and to be tolerated; sleeping pills are swallowed willy-nilly; and a ‘slut’ is the keeper of an untidy house. Wives need to be treated with a ‘firm hand’, and men are like little gods who require cosseting and obedience. Women may well work (until children come along, when they must turn to making paper flowers for pin money), but they should tweak their hours so that they can get home in time to tidy up and have dinner on the table.

It’s as if the word ‘marriage’ means something different entirely. Or rather, perhaps the shock lies in the word ‘marriage’ representing a clear set of values and behaviours. Contemporary readers will be used to defining their own ‘marriage’ or relationship, finding a balance of personalities that works for them – or doesn’t. We are certainly not willing to make the level of sacrifices that young Jilly fully expects to make, just to keep our partners quiet.

None of this is meant as a word of criticism of the book – it’s a wonderful, enlightening read. Jilly’s voice is as pert and knowing as one of her characters, leaving the line between seriousness and tongue-in-cheek rather blurry. The all-night sex and cocktail parties sound magnificent. But the best bit is Jilly’s cringing introduction: ‘What a smug, opinionated, proselytising little know-it-all I was then,’ she says.

So, perhaps don’t read How to Stay Married for matrimonial advice. But do read it to giggle and gasp at how much we’ve changed within a mere lifetime.

How To Stay Married by Jilly Cooper, originally published 1969, reissued in 2011 by Transworld.

5 Responses to How to Stay Married by Jilly Cooper