Guest post: Nikki Gemmell on Tenderness in I Take You 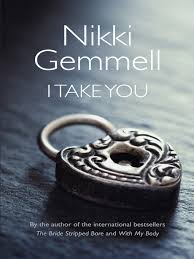 (Psst: scroll to the bottom for a chance to win a copy of I Take You)

Tenderness was, in fact, the original title of D.H. Lawrence’s depth charge of a novel, Lady Chatterley’s Lover.  A celebration of that most gentle and generous of words is at its core.  Lady Chatterley, in a seminal moment, explains to her gamekeeper lover, Oliver Mellors, what’s so striking about him; what lifts him above and beyond any other man she has ever known:

“Shall I tell you what you have that other men don’t have, and that will make the future?”

“Tell me then,” he replied.

“It’s the courage of your own tenderness, that’s what it is.”

Her upper class husband, Clifford, has an utter absence of tenderness.  He sits with his coterie of men, in Nottinghamshire’s grim and cold Wragby Hall, philosophising about sex – and in the process deadening it.  Nothing is instinctive, warm, spontaneous; nothing deeply felt.  It is relentlessly interior existence.

The book is about two people awakening in a natural world uncracking from winter’s harshness, through mutual tenderness, from previous sexual experiences that have chipped away at them, dulled them.  Marriage in both cases has been enormously depleting.  Flattening.  And the word is about so much more than mere sex.  It denotes a way of being: instinctive, loving, unafraid.  A courageous way of being, out of the ordinary.

Why do so many men, even in this day and age, feel they have to mask their tenderness?  To me it’s associated with strength, compassion, confidence; the movingly well-rounded male.  And sex anointed by tenderness, well, that’s the best type of all. The word is spiritual, earthy, deeply biological.  It’s what I’m interested in writing about now; a way of sex beyond the Fifty Shades era.  And I’ve turned back to a novel from 1928 to lead me on the path.  What is the most potent quality when it comes to erotica?  To me it’s honesty.  The frisson of connection.  I’m sure Lawrence didn’t set out to shock when he wrote his revolutionary novel, but merely to be scrupulously honest.  And honesty, of course, is the most shocking thing of all.

Lawrence’s Mellors rages against the world of 1920s England because he thinks it’s been leached of all tenderness.  He begs for warm-heartedness, in words utterly relatable in this day and age.  He tells his Connie, despairingly, that he believes in:

“…being warmhearted. I believe especially in being warm-hearted in love, in fucking with a warm heart. I believe if men could fuck with warm hearts, and the women take it warm-heartedly, everything would come all right. It’s all this cold-hearted fucking that is death and idiocy.”

My just-published novel, I Take You, like Lady Chatterley’s Lover, has the pursuit of tenderness at its core.  It’s an updated version of Lawrence’s novel involving a banker, his wife and the gardener of a beautiful communal garden in London’s Notting Hill, a world of basement extensions, private jets, Chanel suits and ladies who lunch – and a white van man with a big chip on his shoulder who crashes most subversively into it all.  There’s a social and political dimension to the book too, just like Lawrence’s novel.  Mine ends in the summer of the London riots of 2011, with all the jarring disconnects between people of the area coming to a head.

The challenge as a writer was in finding ways to freshen – invigorate – the writing of sex in this post-Fifty Shades era.  We’re flooded, of course, with a brazen new openness, all around us.  Everyone’s seemingly doing it, or thinking it, or reading it – in increasingly bold ways.  Where does it all go from here?  Could it possibly be that this new decadence, effulgence, represents a tipping point of some sort, an inexorable slide into a waning?  What on earth follows?  A flinch into extreme conservatism perhaps, a vast reining back; or a return to a more natural way, with how our bodies look and what we actually do with them.  It remains to be seen, but it’s the latter I’m exploring in I Take You. The book is about finding ways of connecting with another person on a profound rather than superficial level.  Discovering ways of connecting that are invigorating, reviving, rescuing.

We need to nurture tenderness in our men, starting with those boys around us – and how they relate to the world.  Because in adulthood tenderness is a vastly underrated quality, especially when it comes to sex.  As is gentleness, as is generosity.  Teaching our boys the courage of their fledgling tenderness, when young, means they’ll only benefit as adults – as will the women all around them.  As John Ruskin said:  “…the first universal characteristic of all great art is Tenderness, as the second is Truth. I find this more and more every day: an infinitude of tenderness is the chief gift and inheritance of all the truly great men.”  Lawrence was interested in what makes a truly great man, as am I.  Hence, I Take You.

Nikki Gemmell’s I Take You, the conclusion to her Bride Stripped Bare trilogy, is out now in paperback.

Competition closes 7th August 2013 at midnight. Entrants must be over 18 and have a UK postal address. The winner will be drawn at random. No correspondence will be entered into over the result.

I Take You, nikki gemell, tenderness