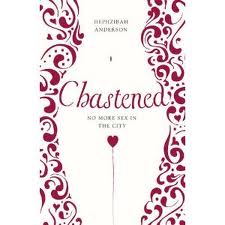 As an Old Married, I confess I started off a little confounded by Chastened. When Anderson decides to take a year off her sexual adventuring, my response was, ‘But why on earth would you do that? It sounds like such enormous fun!’

But then, we always want what we haven’t got, and what Anderson craves is a little more conversation and a little less action. Thus begins a thought-provoking year in which the author tackles twin challenges: resisting the temptation to have sex with every passing fancy, and finding a way to write interestingly about not doing something.

She manages the latter with great aplomb, delivering a reflective and engaging book that’s insightful about the competing pulls of hot sex and slow-burning romance. While she skirts close to cheating on the chastity front, she manages to say a lot more about modern romantic mores than that recent glut of kiss’n’tell shagathon memoirs ever could. By refusing to jump into bed with her beaus, she seems to cast a more sober light on them, and few emerge well from the scrutiny.

Overall, an insightful read for someone who hasn’t had sex with a new person for many years.