I am a veg box cook.

This means that I wait expectantly for my little parcel of joy to arrive each week, and then I respond in the manner of a particularly affected actor. It’s an improvisational encounter, darling. So much more authentic.

The veg box obsession is due to the fact that I don’t like supermarket packaging, and my well-intentioned resolutions to shop locally never come to much. The box arrives each week without me giving it much thought, and I take it inside and cook with it. If this means I have to occasionally process rather more romanesque cauliflower than I’d prefer, I’m willing to live with it.

What I like most of all is to see the seasons filter through to the meals I cook. I grew up with grandparents who kept a fantastic vegetable garden, and I’m still in the habit of getting excited about new things coming up: purple spouting broccoli in the winter, and asparagus in the summer.

All this virtuous seasonality means that Herbert rarely cooks. When I met him, he wowed me with his absorption method for rice and his magical way with a toad in the hole. He came with a cupboardful of Swiss ingredients that were brought over by his mother – a special paste for making gravy, a herb vinegar called Kressi and little cans of MSG-fuelled salad seasoning called Aromat (which you can get in Sainsbury’s).

But somewhere along the line, I took over. It wasn’t deliberate. It was just that everything was quicker and tidier when I did it. I’ve always loved cooking, and there were a million new recipes I wanted to try. I think I rather elbowed Herbert out of the way.

Nowadays, when he wants make dinner, he can find nothing in the house that he knows how to cook. Herbert’s preferred method of making a meal is to take a tiny portion of every vegetable in the fridge, fry it up and throw a can of tomatoes over it. Sometimes this is good, sometimes this is bad, but what’s clear is that it just doesn’t work with swede and Jerusalem artichoke.

In any case, I like cooking most nights. As I work from home, I need something to help me make the transition from day to evening. Tonight, I make Ribollita, my highly inauthentic take on the classic Tuscan stew. Herbert and I ate it during a particularly acrimonious holiday in Lucca, when we argued our way through a rain-drenched October fortnight. Therefore, I don’t cook it it evoke happy memories; I cook it because it’s the nicest way I know to use up a glut of winter greens and not much else in the fridge.

I’ll leave it to restaurants to get it exactly right; I’m a home cook, and I’m allowed to eat what I’m hungry for. My ribollita is chunky and toothsome rather than pulpy; this makes is a great deal quicker, too. As for the correctness of the ingredients: well, let’s just say I made it very successfully with chorizo last week, and leave it at that. 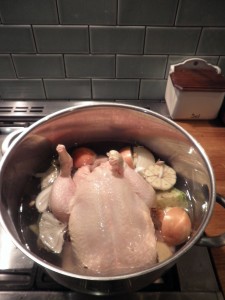