Betty Dodson – Sex for One 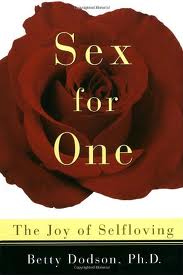 Sex for One is something of a classic. First published in 1974, it encourages women (and men) to really understand their own bodies in order to have better sex – both alone and with partners.

I was expecting Sex for One to be a ‘How To’ guide, but it’s actually more of a conversation, exploring Dodson’s own journey and extolling the right to orgasm. What surprised me was how fresh and necessary its message remains, especially in these times of labial trimming and hymen reinstatement. Most women Dodson worked with had never taken a close look at their own vagina, and those who had often thought that theirs was somehow abnormal. She also found a huge amount of guilt around masturbation, and an assumption that it was an inferior form of sex. It’s hard to argue that much has changed.

I’d recommend this book to anyone who has ever thought that maybe their vagina is deformed, or that they don’t have a clitoris, or that they’re incapable of orgasm (all firm beliefs of mine as a teenager). Dodson’s take on sexuality is a joyous, practical one that will make you think hard about how liberated we really are.