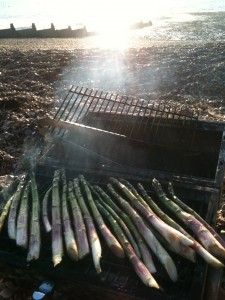 The first holiday I took with Herbert was to Spain, to stay in my Aunt’s villa near Alicante.

Actually, there was a horrible week on a canal barge in Brecon with Herbert’s friends, but we prefer not to speak of that. We had to start drinking at ten every morning just to keep the cold out. And one of our party got so drunk one night that he took a dump on the cabin steps. As I said, it doesn’t count.

In sunny Spain, everything was perfect. We had warmth, privacy, cheap rosado and a roof terrace with a barbecue. We also had a Twingo that my Grandad rented for us, and an adopted ‘stray’ cat that we named Cloudy, but who actually turned out to be the extremely greedy pet of the people next door. It was a veritable utopia.

It was during this holiday that we ‘invented’ barbecued asparagus. I say ‘invented’ because I’m aware that we probably weren’t the first people to do such a thing, but we did so without anyone else suggesting it. Personally, I’d been bought up to treat asparagus with a little more reverence. My Grandad only managed to grow about five spears a year, and they would be carefully boiled and served up for table of eight to fight over.

In Spain, the sheer abundance of the asparagus let us get all rock’n’roll with it. Hot off the grill, we’d dip it in mayonnaise (Hellman’s) and take it in turns to feed it to each other, stalk by stalk. Those were the days before our sex life needed re-booting.

Nowadays, I’m afraid to say we don’t have the patience for co-feeding. But in May and June, we like nothing better than to take our little barbecue down to the beach for wine, asparagus and a good sunset. Even I can’t fail to relax under such circumstances. 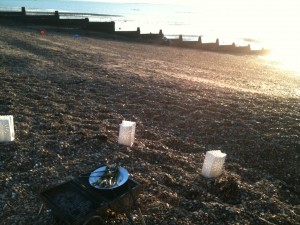 Leave a Reply to thorn Click here to cancel reply.